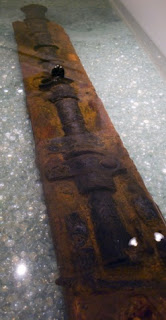 Yesterday, I didn't need to imagine that I was friends with members of the Royal family from centuries ago, because Prince Philip came to see us at the museum. I suppose it wasn't quite like finally meeting Queen Elizabeth I or her father, but it was thrilling all the same.

The Prince came to see our new galleries in Plymouth. Apparently his favourite object was this one on the left - the Cattewater Gun. It was discovered in 1973 when the mouth of the river Plym was being dredged. It is one of many guns which would have been mounted on the ships rail and fired at the crews of enemy vessels. Guns such as these were the most common armament used at sea by both naval and merchant vessels between AD 1450 to 1520. During this period, William Caxton published the first book in England and King Henry VIII became the King. A few years after this gun fell into the murky waters of the River Plym, the English Reformation began, and many Monasteries, like this gun, were lost.
Posted by Inky Leaves at 01:25