Sir John St. Aubyn (1758-1839)
Over the past year and a half I have been researching an 18th century mineral and plant collection at Plymouth City Museum and Art Gallery. It's a two year project, so my time here is drawing to a close. Now I find myself trying to amalgamate all the information I have dug out about the collection and the people behind it, and re-write it all in an interesting way for an exhibition. Part of my contract is to design a touring exhibition about Sir John's collection. I thought it would be the easiest part of my work, but on the contrary! I have unearthed so much about this man and his friends that I am struggling to decide 'what to keep' and 'what not to keep'. So, I thought I should begin writing about him on this blog in several chapters, so that everything is there, saved on an archive system - my archive system. Because it would be impossible for me to talk about my life on this blog without mentioning the man I have studied since my graduation.
Chapter One
Sir John St. Aubyn was born at Golden Square, London on 17 May 1758. He was captivated by science and the arts and was a keen collector. His particular interest was for mineralogy, but he also had interests in botany, which lead him to create a sizable herbarium containing many interesting plants. Most of these have been collected in the field, but there are also specimens from early plant nurseries and important gardens in Europe. The notes on the herbarium sheets are also exceptionally detailed. Adjacent to many species, the medicinal properties and domestic uses have been described. 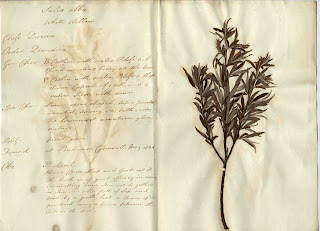 Before his death, Sir John donated a folio containing his herbarium to the Civil Military Library at Devonport, which later moved to Plymouth City Museum in 1924, where it was hidden away. In 2007, Plymouth City Museum and Art Gallery secured a grant from the Esmée Fairbairn Foundation, enabling the museum’s natural history department to conduct a variety of work on this historic collection. In the following chapters, I will recount my journey through time as I removed centuries of dust to reveal a collection of scientific and cultural importance.
Posted by Inky Leaves at 01:51