The Lion and the Tea-Leaf Almost Complete 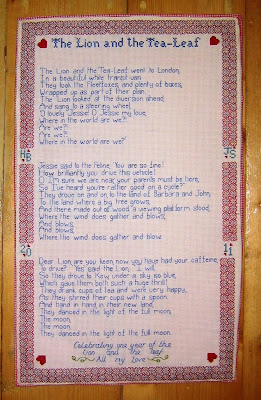 Just doing the back now... 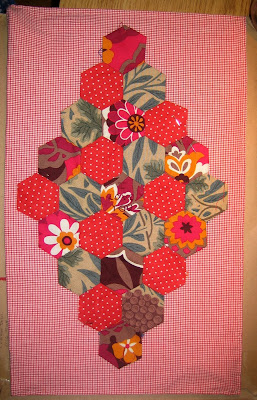 
I was going to have the sampler framed, but I made a mistake on the border and a mount would have made it look really obvious, so I decided to do what I usually do, and that is to encase the back with material and place it in a special box. There is a lot of sunlight in my boyfriends room, so it will last longer kept in a box.

I chose this simple material, because a border of it can be seen from the front and so I had to pick something with the right colour that wouldn't detract from my own sewing. I made these patches when travelling on a train with him from the South West, so he'll probably recognise them. Which is rather nice I suppose... They are part of the story.

I wanted to sew in words inside each hexagon, about the things we had done, but I am running against the clock and it seemed a little obessive. He gets the idea as it is, so I only wrote inside one hexagon.