Trip to the V&A to see Beatrix Potter's Grapes 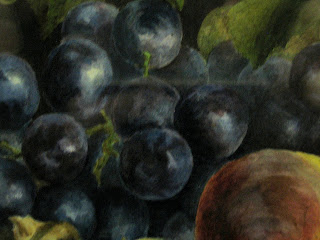 Above and below: Still life drawing of grapes and peaches October 1883 (Potter was roughly 17 years old). 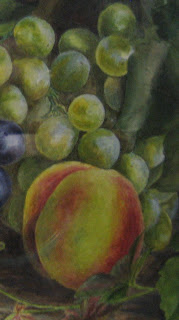 So I visited the V&A last night - always worth a trip on a Friday night. They close at 10pm on Fridays and there is something really wonderful about getting lost in the rooms of a museum that size in the night, which I hasten to add - I did. I went with the intention of seeing Beatrix Potter's still life studies from when she was sent to art school at a young age. So after a cup of Lapsang Souchong in the 'Green Room', I trotted up to room 102.

Really fascinating little exhibition and she quite evidently did not suit the style in which they were instructing her, and yet she tried. You can see how much she is trying... and improving. I found this to be really encouraging. One has to keep practising. Below is an image of her grapes which she painted a year before - notice the difference?! (Apologies for the appalling image). 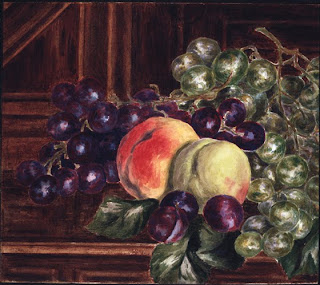 I had no idea but interestingly Beatrix Potter was quite a scientist... She wanted to become a mycologist (study of fungi) and her uncle tried to introduce her to the Royal Botanic Gardens, Kew, but she wasn't accepted becuase she was a female. Later on, Potter was one of the first people to say that lichens were the result of a symbiotic relationship between algae and fungi. In 1897, her uncle presented her paper on fungi to the Linnean Society becuase women were barred from attending meetings. A hundred years later the Society issued a posthumous official apology to Potter for the way she had been treated. She also lectured at the London School of Economics several times and visited the V&A frequently as a child.
Picturing Plants: Masterpieces of Botanical Illustration

Rudolf Koch (1876-1934)
So, after being inspired by Potter's grapes I then got lost in the galleries. After skipping through jewellery, miniatures, tapestries and a series of Constable paintings, I came across a temporary exhibition on botanical illustration. I found it most interesting - nice collection of works on show from all the ages using a wide range of media. I really liked these foxgloves. I like the simplest illustrations - they are always the best and the most useful for scientists. I also appreciate how hard it is to be simple when depicting something accurately. Nice work there Rudolf!

So I am up to the Lake District on Thursday night with Henry. He has been very generous and wants to whisk me up north on a romantic get-away - I can't wait! I wonder if I'll bump into Peter Rabbit while I am up in Windermere ?
Posted by Inky Leaves at 12:33