So I was a little disheartened yesterday as I left Kew Gardens. I was hoping that some of the Camelia's would be calling out to me to be painted, but instead they clung onto their branches with weak stems and faded, brown petals. Jack Frost had got to them. Not a patch of colour in sight. But then I decided to pop into the shop. The shop at Kew can be, in my view, a hit or miss affair, but look what I found: 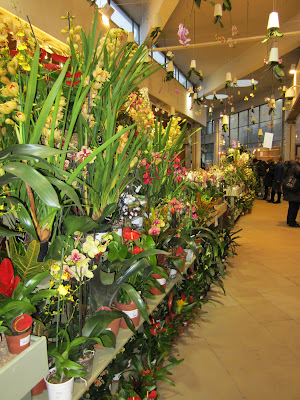 Rows and rows of beautiful orchids! It is the tropical extravaganza here at Kew and I totally forgot that the shop stocks it's shelves to the brim at this time of year. So the plan now is to purchase several orchids and do a mixed arrangement using them. I am so pleased I have found my subject!

On another note, I want to discuss rainforests

I have always painted plants, for as long as I can remember, but I didn't take it seriously until I went to Malaysia to do some field work. I noticed that I kept drawing alongside my study work and surveys. For me, not only was the process of drawing easier to note things down but it was the best way to convey information to an audience. I am learning to become a good botanical illustrator because I eventually want to use this out in the field. Rather like Margaret Mee. I want to use my art for conservation. Sadly, I don't have the means to go out into the jungle at the moment. I have no support network (group of scientists) or the funding. This frustrates me as I feel I am being called. I felt it in Malaysia, I felt it in Belize, I felt it in Indonesia and I feel it now.

If I was really determined, I could force myself to go out there. But for me I have decided to go along a more personal route at first. My theory is with the rainforests seeming to be 'so far away' from the western world, if this distance is distancing us in our minds (along with a bit of denial). Is a geographical separation leading into a social one? So I have been digging around this idea for the last two years. I have been wondering what to do next. I will probably go back into science once this course is finished, but I am keen to use what I have learned. So I have decided to embark on a big project which will take me a long long time. I'm keeping it quiet at the moment though I am afraid, so I can't say any more than that.

However, while I am trying to save the planet from my desk, a dear friend of mine Stephanie Ayres is doing what I wish I could do. She has managed to get a place to go to Borneo with The Heart of Borneo team. I am so excited for her. She is a brilliant illustrator of plants, animals and insects. However, she needs some help with funding. I am defiantly going to try and support her and the team. Looking at their website they do some fantastic things. I particularly like the canopy work (scroll down). 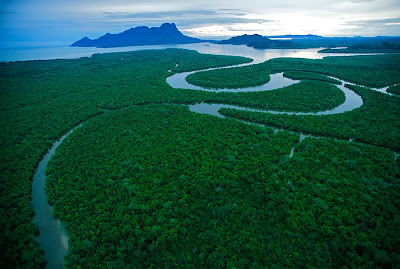 Rainforests are among the most threatened ecosystems on the planet. Although the precise area is debated, each day at least 80,000 acres (32,300 ha) of forest disappear from Earth. At least another 80,000 acres (32,300 ha) of forest are degraded. Along with them, the planet loses as many as several hundred species to extinction, the majority of which have never been documented by science. As these forests fall, more carbon is added to the atmosphere, climactic conditions are further altered, and more topsoil is lost to erosion.

Extent of deforestation in Borneo from 1950-2020
Despite increased awareness of the importance of these forests, deforestation rates have not slowed. Analysis of figures from the FAO shows that tropical deforestation rates increased 8.5% from 2000-2005 when compared with the 1990s, while loss of primary forests may have expanded by 25% over the same period. Nigeria and Vietnam's rate of primary forest loss has doubled since the 1990s, while Peru's rate has tripled. Overall, FAO estimates that 10.4 million hectares of tropical forest were permanently destroyed each year in the period from 2000 to 2005, an increase since the 1990-2000 period, when around 10.16 million hectares of forest were lost.
There is some super work on the Kew site from the GIS team here. They tweet from the rainforest everyday and have a blog. 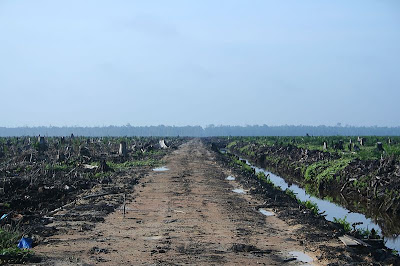 Deforestation in the Riau Province, Sumatra, to make place for a pal oil plantation (2007). Palm oil is used in soaps, washing powers, crisps, sweets, cakes, petfood, candles, cosmetics, shampoo's and in biofuels. When used in food it is usually listed as 'vegetable oil' on the ingredients list - rarely as palm oil itself.
Check this out.
If you want to support Stephanie I suggest that you drop her an email: stephanie_ayres@hotmail.co.uk
Posted by Inky Leaves at 02:44