Beware of the Peony 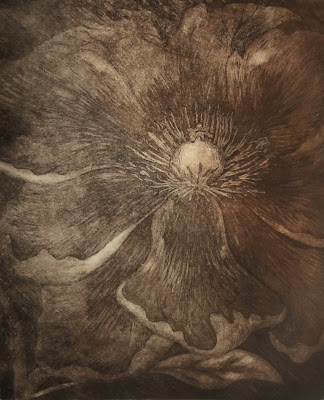 Aquatint etching inspired by the image used for the front cover of 'Flora - a illustrated history of the garden flower' of a Paeonia suffruticosa cultivar.
Original composition by Henry Charles Andrews.


I spent my Wednesday afternoon in the printing studio, and this is what I produced. I began this plate at the end of June 2010 as an etching, then I aquatinted it in July 2010. I was very unhappy with the results -it was not dark enough and didn't have enough layering so I did some ore aquatinting in February 2011... and only now have I had the chance to take some prints from it. I really like the dream-like quality of the print  - the weightlessness and the timelessness. 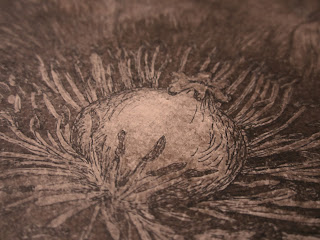 I was inspired to do this piece after I had an amazing dream about a Peony bud opening. In the dream someone came over to me and said 'Don't touch it! Beware of the Peony!'... It was the most tantalising dream I had had for some time - all I wanted to do was to touch it. The rich deep red of the new petals and the hairy sepals which encased them, all covered in dew. 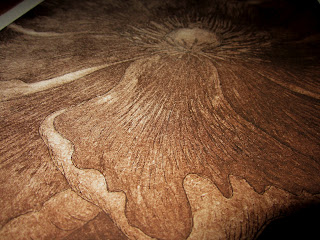 I was exhausted after taking these prints. I took five in total, but only one was worth keeping - the others were either too light or too dark. It was surprising how much labour goes into inking plates this size and I obviously need to get back into the swing of things when applying ink. I guess what was so hard was being on my own in the studio. I had to think everything through several times and I was always worried I'd get ink on the blankets or on the screen printing table. I couldn't relax and get into the swing of it. Anyway, I am glad I got at least one good A4 sized print (paper just a bit off A3 size).