So I have done the impossible and started another sampler! This one is for a wedding in July, so I am well ahead of the game. As you can probably tell the beautiful couple are German! They have just moved out to Tunsia and are busy preparing for their wedding.

So I've tried to make this piece of sewing a bit easier than the last wedding sampler I did. So far so good.  I have also done another impossible thing of gaining an i-phone (people who know me well will confirm that I am generally against such devices). Henry got his new iphone 5 this week and has given me his old iphone 3GS which I actually prefer as a model. So this blog post has been half written on the iphone (hence the bad pictures). This is great as it means I can post when I am in the East of London. The only irritating thing is that the app for Google Blogger is rubbish and I have to polish off what I am doing on Henry's computer. Never mind - hopefully Google will sort themselves out soon.

Off for a walk today with Henry... The sun is shining and I have the weekend off. So will log in tomorrow with other news. Have a super day! 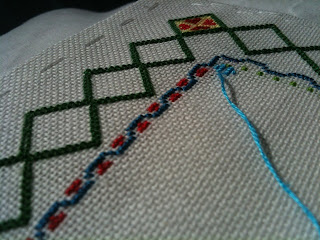 Close up on the boarder - there will be hearts in all the green diamonds
Posted by Inky Leaves at 03:01