The Botanical Imagination at the Whitechapel Gallery

Karl Blossfeldt (1865–1932) is recognised for his extensive and unique collection of photographic plant  portraits that reveal the intricate forms of flora. His fusion of scientific observation, sculptural form and surreal composition pioneered an artistic style that forged new approaches to modern art and photography. 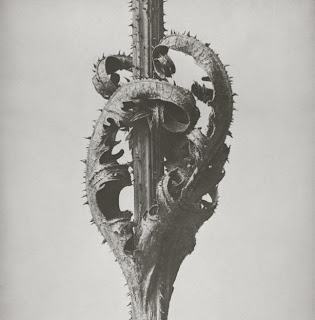 Working at the junction of Art Nouveau and Modernism, Blossfeldt developed a series of homemade cameras that allowed him to photograph plant surfaces in unprecedented magnified detail. Working as a tutor in Berlin from the late nineteenth century until his death, Blossfeldt’s works were primarily used as teaching tools and were brought to public attention in 1928 by his first publication Urformen der Kunst (Art Forms in Nature). Swiftly regarded as a seminal book on photography, Blossfeldt’s factual yet finely detailed imagery was praised by Walter Benjamin, adopted by the Surrealists and mass produced in magazines and books. 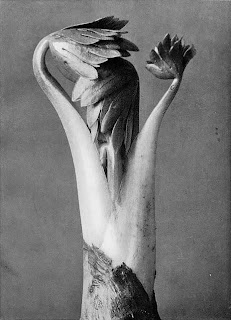 Between 16 April - 14 June 2013, the Whitechapel Gallery will have an inspiring presentation of Blossfeldt’s work on show. The exhibition will consist of over 80 silver gelatin prints made and used during his tutorship. In addition, five rarely-seen large-scale prints will also be shown. These historic photographs will be accompanied by his original publications, a set of working collages made in preparation for his books along with a number of avant-garde writings that embraced his work, including a text by Georges Bataille.

Interestingly, Rory McEwen was a big fan of Blossfeldt's work and held a number of 'Homage to Karl Blossfeldt' exhibitions during this lifetime. They showed his paintings of enlarged growing points and buds of plants with misty Scottish landscapes behind.

We have one of Rory's 'Homage to Karl Blossfeldt' pieces on show in the Shirley Sherwood Gallery of Botanical Art, Kew this summer. If you are based in London, or spending a weekend in the city, I'd recommend seeing both exhibitions. 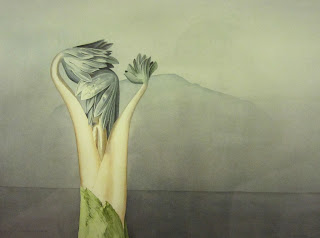 
To coincide with their exhibition on Karl Blossfeldt, the Whitechapel Gallery is holding a lecture to explore the role of botany in art.

If you are interested in his work, blogger 'Crises et Chuchotements' has loaded up lots of stunning images.
Posted by Inky Leaves at 00:43