My mother visited a house not long ago when dropping off a pot and inside it she spotted some woodcut prints by the artist John Hall Thorpe. She knew I'd like them, so informed me about her find as soon as she could. I myself had never heard of the chap, but I can say that I most certainly do like his work. There isn't much about the man online, but there is a little blog post and Camberwell Fine Art has written a bit about him on their site. 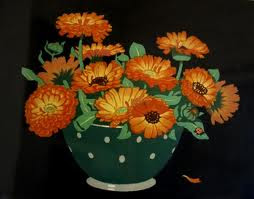 Apparently he is Australian-born and learnt the art of colour woodblock printing in the early 1890s while living in Sydney. He attended Heatherley’s School of Art and held his first solo show in London in 1918; his success was established almost immediately. The brightly coloured woodcuts became something of an international phenomenon during the 1920s and 30s and were designed with the specific intention of providing bright, colourful decoration in peoples homes and offices. Hall Thorpe produced his work in reaction to what he saw as dull and laborious realism of so much of the decoration in people’s homes at the time. 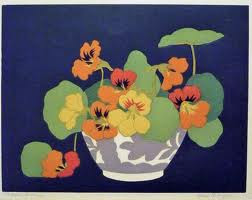 His prints sometimes come up in auction houses if you are interested. I myself would like to see them made into a set of stamps because they are visually quite powerful.