This week I am attempting a hat trick... and if all goes to plan, I might even do a four-trick, but I reckon that's pushing too hard. Three is a nice number. It's a magic number. One should always plant in threes, so maybe they should paint like that too? So yes - signed the Purple beans on Monday (it's great feeling isn't it?), and the Conkers and the Hosta today . Although the latter is not quite complete, I have done it as a way of telling myself that it damn well will be).

I am aware that Cos and the Corona de Espinas need to be finished in the back of my mind, maybe I'll attack them next week if I am in the mood, and then I can get on with some new work. 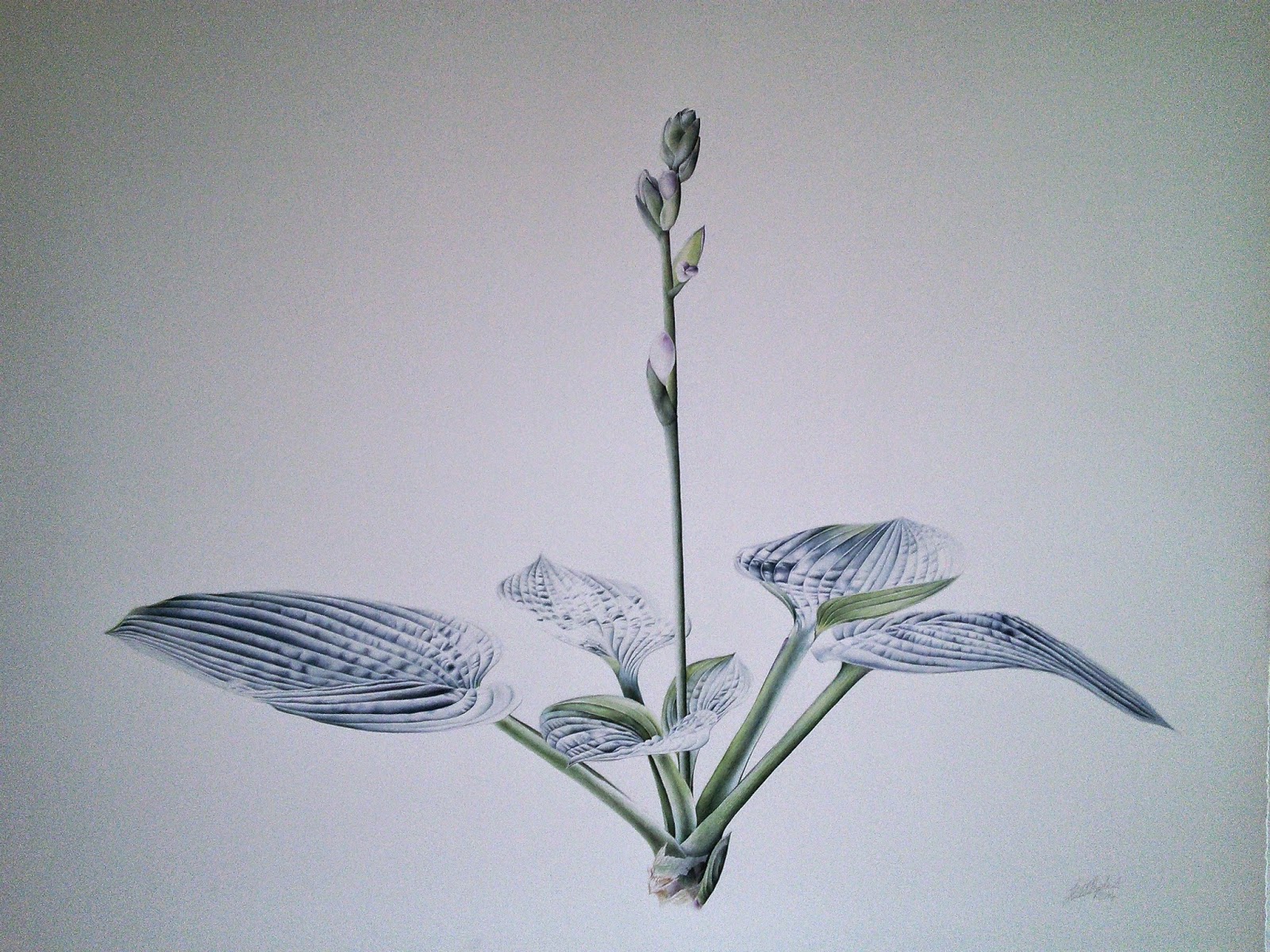 Therefore yesterday was spent overcoming my fear of Harry the Hosta and basically getting on with it. Life doesn't stop and I knew in the back of my mind that the flower wasn't too dark, it really was that dark in the room, it was just that the painted leaves were not yet dark enough which made the flower look really sinister. Anyway - I sat down and paid some attention to Harry's base - he needed some serious grounding. It took me half a day and I got very annoyed with him. I furiously raked the lawn and went back indoors and attempted a bit more. I got annoyed again, so I made some tea... Then went back in... I did a bit more... Then I had to do a papery bit and couldn't do it. I got annoyed again. I walked over to my bookshelf and got my 'Colours of Reality' book out and had a look at Rory McEwen's papery onions, then went back to my papery bit. Managed it, but not as well as Rory. Got annoyed again because of this. Had a bath, had a beer and gave up.


Day two... did the odd chore around the house and then entered the studio at 11am. Opened the shutters, watered my Plymouth Strawberry, said hello to Ophelia and Cindy and peeled back the plastic wrapping which had tucked Harry in for the night. My reaction: Utter surprise at how grounded Harry now is and feeling a bit more content about the whole endeavour - the flower now at last fits in. Phew - saved...! Maybe this is something worth baring in mind in the future - when I next paint a top heavy plant I might need to ground them first or as soon as I can. Note taken!

So I then painted for an hour on the left leaf and then had lunch in the sunshine while it was out and decided to not go for a walk but to face Harry's leaves for the rest of the day... Carried on with the left leaf and turned the painting around like I did the flower. I am not a fan of doing this as you can't really translate what you are seeing very effectively, but I am finding it hard work getting all those parallel veins in horizontally. My shoulder just doesn't want to move in the right direction. I also feel that it is ok to turn it this time as that is what I did with the flower and you never know - using the same technique might help all the bits talk to one another as a whole?! It's a wild notion.

Painted for what felt like ages (but it wasn't) and mum made me a tea. I drank the tea and turned the piece around. I was pleased, very pleased - what a GREAT FEELING! The leaf is darker and now the flower stem looks even more part of the piece. I think we are ok everyone - I think Harry has been saved and I have managed to grow some balls in the process. Superb.

So now I am working on the right leaf. I haven't finished the back one yet, but remember how I like to 'weave' around the paper...

So let's finish Harry today and then who knows...