It's that time of year again (well actually its a bit earlier this year), the RHS Botanical Art Show will be opening tomorrow!  The show will be in the RHS Lindley Halls, between 10am–5pm on the 27 and 28 February 2015. 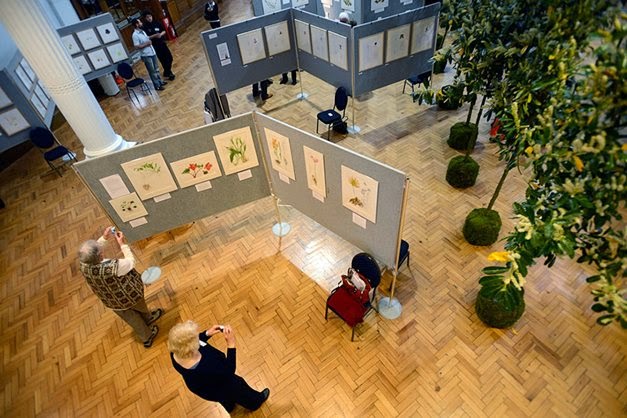 Now in its sixth year, I'm rather pleased to say that the show has broken away from the RHS Orchid Show to become its very own stand-alone event. I'm so glad that this happened because it feels like botanical illustration is getting the amount of attention it deserves and no longer an 'add-on'.

As usual, the show will feature work by both first-time exhibitors and experienced artists from countries all over the world. You can see a list of Botanical Artists at the show (75kB pdf) here. I'm pleased to announce that they are also keeping the pop-studio feature, which is something they introduced last year. There will be demonstrations by award-winning artists Julia Trickey and Susan Christopher-Coulson. The Chelsea School of Botanical Art will also apparently be running taster sessions for those who want to have a go themselves.

Wish I was in the UK to enjoy this spectacular event. Can't wait to hear all of your thoughts online after the weekend. Keep me in the loop!
Posted by Inky Leaves at 11:30