I was burning the midnight oil last night as I tried to get the cotton commission for Memorandum Journal finished. It fell into two parts - the first was the botanical side of things and I managed to finish that a few weeks ago, but the second part was delayed because the materials I needed to work from got lost in the post.  C'est la vie!

Thankfully they arrived on Tuesday afternoon and the design company (A Practice For Everyday Life) moved the deadline for me to compensate for lost time - thank you APFEL! As I opened the box, I found some sheets of archival cotton samples along with four beautifully made garments by Sunspel. They were so soft and divine to touch. I thought about the queen and decided that she must have a night dress made of this material.


Anyway, I had planned to get cracking on with it on Wednesday and Thursday, only a lot of Wednesday was filled with trying to get an identity number in Spain. In Spain most people need an NIE. As I understand it, it is a personal number that is used for pretty much every legal transaction in the country. Therefore, you'd need it to open a bank account or to buy a car for example. I know this, because these are the things I am trying to do. So in order to have an NIE you need a letter from the bank saying that they are happy to open a bank account for you once you have the NIE. Problem is, Santander (and probably most banks in the city) didn't want to give me this letter because:

So bit of a catch 22 there... Luckily the bank in the village was more amenable than the city banks and I now have a non-resident bank account, which means I can now get my NIE.

So with all this kerfuffle, I had little time left to complete the second half of the job, which was to illustrate the weave of thread in the samples. Tricky work indeed, but I managed to complete it at around midnight. Right, time for a beer! 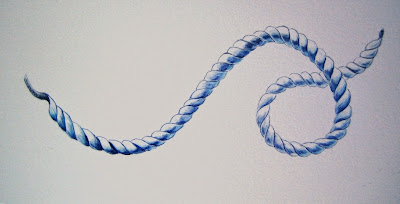