Things are taking time, but I am making progress. I have invested in a car. It's a leap of faith that I have been putting off for ages but in the end I decided to commit. He's black with a very large boot and blackout windows. I have named him Diego after Valaquez. He has the same initials as Darth Vadar. In fact, he probably looks a more like him if Darth was ever reincarnated as a car, but I went with a painter's name in the end. So here we are, another step towards the travelling part of Blue.

As I start to learn to drive again I find myself having to re-acquaint myself with many other old skills whilst learning new ones including how to use sound recording software. These are the frustrating stages I have to get my head around before I can really start to grapple with Blue. It's frustrating as there is nothing tangible to show for the time put into learning (yet). However, I am enjoying the process of becoming broad. 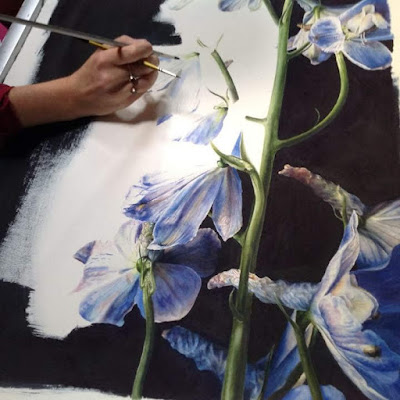 So I continue to feel very much as I am starting from the beginning again. Up until the end of May I was still in a very lonely, dark place. I am not sure what it was. A dark realisation most likely. Nature can be dark. It also can also be miraculous. I am trying to concentrate on that. However one cannot have one without the other, we all cast shadows, and as a painter I feel drawn to explore the dark shades of what I have been feeling for the past 15 months. Rabbit holes are dark places. Wonderous, but, like my car, dark.

'To live with our shadow is to understand how human beings live at a frontier between light and dark; and to approach the central difficulty, that there is no possibility of a lighted perfection in this life; that the attempt to create it is often the attempt to be held unaccountable to be the exception, to be the one who does not have to be present or participate, and therefore does not have to hurt or get hurt.'

In my search for something cathartic and mystical, I have been looking at the work of religious painters and the paintings of El Greco. I have also noticed in my sketch work and daydreams things are starting to become out of focus and the proximity of the flowers keeps changing. Sometimes I am a fairy enveloped in the petals, sometimes I am just hovering above like a ghost-seeing it all laid out in front of me. Pinned to a board as if to be dissected.


As I carry on exploring this enclave*, I am noticing that what I am starting to tackle is most likely the notion of flower painting, which is actually quite different to anything I have ever done before. For me, flower painting still falls under the umbrella of botanical art, but it is moving further away from the scientific end of the spectrum and closer towards the more artistic end, the more emotionally descriptive and mystical.


In my last post, I touched on the distance of blue and how for me it describes the eternal longing or desire for things. This is why for me, blue has always been a romantic colour and the colour that sparked the Romantic movement in 'Blue Blume'. I nodded briefly to the Romantic Movement when working on Leafscape when I looked into the elements that go to make up Gothic horror. These themes still to beguile me. But what makes blue 'blue'? I find it is a colour who's meaning can readily changed by its context, by neighbouring colours and by lighting. You can make blue happy just by upping the brightness or its intensity. You can make it sad by lowering the saturation and its clarity.


My Consolida is my consolation and consolidation as I learn to forgive and re-build myself.
- J R Shepherd


Lately, black backgrounds have begun to lure me in just like they did four years ago when I first arrived in Spain. At the time I didn't know why I wanted to paint dark backgrounds, I just played around in the dark not even considering it. Now, however, it is May 2018 and I am sitting in my very English room wondering why I am drawn to paint black backgrounds again and then finally the penny drops. It is from being in Spain. I have been influenced. Spain's stark contrasts continue inthrall to me. The shadows on the white walls and under the canopies of popular trees. Its the darkness we see in Ribera paintings and of course those of Goya. Ribera is my favourite Spanish painter. It's difficult to writtle them down, there are so many and if El Greco was Spanish I'd probably choose him. However, the intensity of a Ribera painting is what I find so entrancing. The perfection of his painted fingernails, the red robes and the endless blackness around. I want to paint like this. I want to paint with intensity. So now I am changing tactics in my attempt to combine the elements of Mannerism with the Romantic.

The incredibly dramatic illumination we see in these dark Baroque paintings is called, Tenebrism (Tenebroso in Italian) which can be translated into English as very dramatic illumination. Chiaroscuro is another kind of play on lighting in painting, but I feel it isn't the same. Tenebrism seems to be to be more dramatic and the tenebrist artist’s tend to use more darkness in the light-dark contrast while the chiaroscuro artist’s use more light. Famous tenebrist artists are Rembrandt, Gerrit van Honthorst, Francisco Ribalta, Jusepe de Ribera and Georges de La Tour. Artemisia Gentileschi, one of the few women artists of the Baroque, was an outstanding exponent of tenebrism.

Tenebrism came into popularity around 17th century in Italy and some parts of Spain. Chiaroscuro on the other hand was already famous from works created in the Renaissance era (around 14th century). Although the artist Caravaggio is generally credited with the invention of the tenebristic style, this technique was used much earlier by other artists, such as Albrecht Dürer, Tintoretto, and El Greco. There were probably lots of other painters too who have just faded into their murky black backgrounds since their time as forgotten ghosts. This sadly happens all too often, even now.

What I am doing is nothing new. Barbara Regina Dietzsch is very well known for her botanical paintings on black backgrounds, as is Mary Delany for her botanical collages and then there are all the Dutch Masters. More recently artists Coral Guest and Rosie Sanders have both produced works with dark backgrounds/space. Currently, my paintings are not painted using black per se, but with a mix of Winsor Blue (Red shade) and Perylene Maroon, working to keep it all to the blue end of the spectrum. I want the whole pieces to be blue.


For the first darker piece I chose to paint a Consolida, which is also known as Larkspur. I heard one of the gardener's talking about them when I went to Great Dixter last June (just before I dispatched 300 INKQs containing 'The Kiss: Onslow Gardens') and so it seemed like a good flower to paint. It was the next flower on my extraordinarily long list. Furthermore, I feel my visit to Dixter really was quite pivotal in many ways. In helping me to close the painful doors of the past and encouraging me to venture onwards. I had to travel through Brighton station, (where only 11 months earlier, the Cheshire cat had bid me farewell) so that I could get to Rye. Without Dixter, I wouldn't be planning my first long-haul expedition to the Antipodes. Funny how things flow.


'To forgive is to put oneself in the larger gravitational field of experience than the one that first seems to hurt us.'  - David Whyte

Consolidae, and their close cousins Delphinium, are stately spikes of eye-catching blossoms in astounding shades of blue. The name Delphinium is derived from the Greek word 'δελφίνιον' (delphis), meaning dolphin, for the nectary's resemblance to the bottlenose of a dolphin. The world Larkspur originates from 1570s, from lark (n.) and spur (n.) to describe the resemblance of the calyx and petals to the bird's long, straight hind claw. Delphinium are native to the Northern Hemisphere and historically, were used by Native Americans and European settlers to make blue dye, and across the pond, it was the primary source for ink. 'The juice of the flowers, particularly D. consolida, mixed with alum, gives a blue ink' (Figuier, 1867).


The background of this painting was painted using charcoal powder in the mix with watercolour paints. I guess it is the gum arabic in the paint which acts as a binding agent, stopping the charcoal from falling off. The bonus of combining charcoal powder in the paint is that it removes shine and brush marks, so you are left with a very velvety surface that absorbs light like Vanta Black. With the Consolida, I have tried to 'bring' the background into the plant to create black space by using a charcoal pencil on the flowers themselves. I like the effect, but I am not completely sold, so I am still experimenting. The second painting, 'Blue Rose', has been executed only in watercolour. For this painting I decided to do something that botanical painters don't usually do and paint a flower that is not natural. A Rose that has been deliberately altered by mankind using synthetic dyes as representative of our unwavering quest for perfection and the darkness this obsession can bring.

'To cast no shadow on others is to vacate the physical consequences of our appearance in the world.'

There are many sides to blue. Love and loss come hand in hand. Joy and pain. The breaking down of things, and the building up. My Consolida is my consolation and consolidation as I learn to forgive and re-build myself. To forgive is an act of love and compassion. It is a skill of generosity and of understanding and truly necessary if one is to live a full life. Consolidated, I now more able to step out of my enclave and beyond.

*The word enclave is French and first appeared in the mid-15th century as a derivative of the verb enclaver (1283), from the colloquial Latin inclavare (to close with a key). A parcel of land surrounded by land owned by a different owner, and that could not be reached for its exploitation in a practical and sufficient manner without crossing the surrounding land.

In the meaning of flowers, Delphium is about enjoying the lighter side of life, even when troubles get you down and expanding your options and attracting new opportunities.

Jabbour, F., and S. S. Renner, (2011), Consolida and Aconitella are an annual clade of Delphinium (Ranunculaceae) that diversified in the Mediterranean basin and the Irano-Turanian region. Taxon 60(4): 1029-1040.