It’s hard to understand what it is we are capable of until we risk leaving behind what we’ve always known. - Chani

In order for things to begin there needs to be an ending. Here in Australia, I feel that things have slowly come to an end. The studio that I had been using as a base has come to its own end in the form of a lease expiry. The beautiful garden that was just coming into flower outside was packed away before my arrival from New Zealand and all the offices are now empty. As I stroll around the confused space, I find a knot of fairy lights, a coiled hose pipe, the charcoal remnants of a fire and a shovel which cut straight into a mound of fertile compost like a dagger. Everything I looked at on the 18th December described how I felt. Knotted, burnt out and cut before any cutting had actually taken place. I took a series of black and white photographs with my heart in my throat. I could barely swallow and I felt nauseous. I had a sad feeling that things were very quickly coming to a close and there was nothing I could do but let go of what those four weeks in Melbourne had been. It wasn’t going to be easy to let go, I had become attached.

Hey True Blue, don't say you've gone!
Say you've knocked off for a smoko...
And you'll be back la-ater on.
Hey True Blue, Hey True Blue
Give it to me straight, face to face
Are you really disappearing?

I think I can say quite honestly that I had never been so happy in my life during those days in Melbourne. The happiness was because of a meeting between place, time and the people. It was a meshing, an optimism, a hope. Now, the place was being dismantled, the time suddenly wasn't quite right and the people were also saying goodbyes and I found myself, after a month of being in New Zealand, feeling quite scared and uneasy to what I had returned too. I felt vulnerable, alone and out of synch with everyone. Even my flight from New Zealand had been held back by a day due to four broken aeroplanes. It felt like Australia didn’t want me back. I’d fallen out of the slipstream about as fast as I had fallen into it. 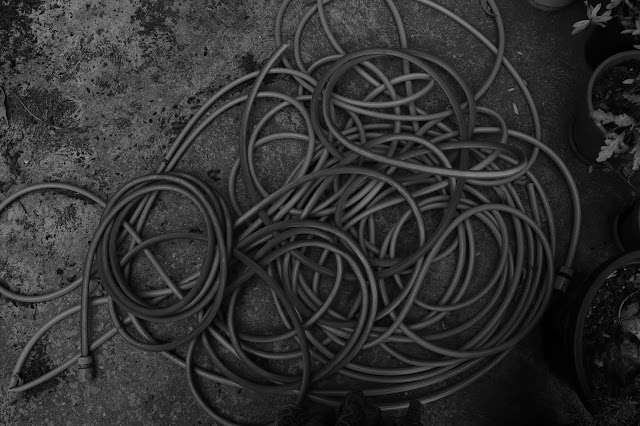 The habitat of a person I had grown to care for very deeply, was no longer in the window of the building. On the last day, only one thing remained - their distant face in the window and an open laptop. Everything seemed distant. The distance of blue. Just as it was in my more recent dreams, I found myself unable to reach them. My time was over. Our time was over, for now.

"Keys that jingle in your pocket, words that jangle in your head
Why did summer go so quickly, was it something that you said?

When you knew that it was over you were suddenly aware
That the autumn leaves were turning to the color of her hair.

Like a circle in a spiral, like a wheel within a wheel
Never ending or beginning on an ever spinning reel
As the images unwind, like the circles that you find
In the windmills of your mind..."

In my desperate attempt to stay on course, I stomped around Melbourne with a big, blue suitcase and hesitantly filled it with oil paints and painting media, later hopping onto a train which took me back to where I was staying in the suburbs. Stomach tight and feeling jittery, my heart and it hopes once again broken. Grief set in.

I said in my last post how after conquering one flower, another one comes into my life and alludes me. I finally conquered the Agapanthus and it's agony... Then the Sun Orchid came in during All Hallow’s Eve and it’s taunted me since. Only this time it is far more mysterious. It's a dangerous heady sort of feeling. Slippery, tricky and confusing, like a picnic at Hanging Rock; a bad dream, a puff of smoke.

"You should grow a beard
A beard to tell a thousand stories never told before
A beard to tell you tales, whilst the fireplace roars
The closing of relationships and the opening of doors..."

I often wonder if I could just settle down with a quiet life or if I am now addicted to the highs and lows of whatever this existence is that I seem to be shaping for myself.  I ask why am I pushing so hard? To what end and at what cost? What am I willing to sacrifice and why? A friend of mine has told me to just get on with things actively rather than ask all these questions, but when one finds oneself this far away from anything they know you can't help but ask how you ended up here. It's just who I am as a person.

‘The goal of art is to reveal unearthly life dwelling behind everything, to break the mirror of life so that we may look being in the face’ (Franz Marc).

I spent Christmas in quiet contemplation trying to regain the strength I had somehow lost, whilst preparing to go back to Tasmania on limited luggage. I posted all the materials ahead of me to a house on 'Comeback Road' and laughed out loud as I wrote the address... for that is exactly what I am doing, I am coming back.

I have been trying to finish sketches, but they are all dead pieces of work. I can't seem to distill whatever it is I am trying to distil. I know that the reasons behind this are because I am not focused - there is too much going on in my head and heart and I am still moving around between B&Bs. I have also lost energy and am full of self-doubt. Usually, I paint from emotion, I either project myself onto the plant or the plant does it to me, but now I am trying to incorporate what the landscape is trying to tell me as well. I feel like a conducting rod with electricity pulsing through it and it's almost just too much. I ask myself, why stop doing what you did before? Why not just carry on interpreting flora? The answer is, I have no idea why - again it's just a feeling that I should consider the other elements. So I am considering the bushfires, the history of a landscape both geologically and ethnographically as well as the story of my heart and the lure of blue.

“Many crises in our lives have a long unconscious history. We move toward them step by step, unaware of the dangers accumulating, but we fail to see is frequently perceived by our unconscious, which can pass the information on through dreams. A recurring dream is a noteworthy phenomenon. It can anticipate a future event of importance” Jung. I came to Australia because of a series of premonitory dreams I had between 1998 and 1999. Since arriving here, I have seen the people and places that I saw in those dreams. That in itself has been really hard to digest over the past eight weeks. I clearly don't like the mystical as much as I thought I did. I don't like not knowing how or why I had these dreams. How could I have seen half the things I have seen 20 years before I saw them? All I have to run on is the nodal axis of the moon which is a 20-year cycle and the fact I had my Reiki attunement in these years. Did I accidentally open up a portal through time and place? Or did someone else open it and reached out to me? What on earth is going on?

A friendly reminder of the quote that led me into Blue, and how terrifyingly accurate this quote has now become to my own life:

"but I long to see the blue flower. It lies incessantly at my heart, and I can imagine and think about nothing else. Never did I feel like this before. It is as if until now I had been dreaming, or as if sleep had carried me into another world."
Novalis, from "Henry von Ofterdingen"

In these dreams, there is no storyline, just places, faces, voices and feelings. I remember after having them at the age of 14 that I’d somehow end up in Australia. It was just a feeling. I was older in these dreams – a young lady. I felt solid – real, alive. More alive than I have ever felt. Stable. Secure in my skin. This is something I have never actually felt in my whole life. I still don’t, but I wonder if the storm I have had to ride out alone this Christmas is the beginning of me finding a way of being happy in myself and secure in my decisions.

Now, hiding in an AirBnb on Drummond Street which used to be used to house women who wanted to further themselves many decades ago as well as painters who couldn’t afford proper housing, I am reconsidering compositions. I sit meditating and visualising for hours. It takes hours and hours and is actually one of the most exhausting stages to what I am doing. It's how I work. I am aware the clock is ticking, which really isn't helping this deep process but I have to ride it out.

“What we have to reconquer is the weight of lost reality. We must make for ourselves a new heart, a new spirit, a new soul, in the measure of man. The painter's true reality lies neither in abstraction nor in realism, but in the reconquest of his weight as a human being” (Alfred Manessier).

Tomorrow I will be in 'Marrawah' which means 'Eucalyptus Wood' in Aboriginal Peerapper or 'Number One' and it is where I will be for the next four weeks. I like the fact it can mean number one – because I feel that this is where Blue really begins.

With thanks to the fabulous Amaya for her kindness and guidance over the past 6 months since I embarked on this journey. Thanks to Emily and Chris for their love and care in Melbourne and to Natasha, Bambi, Vida, Tamsin and Poppy of England, my mother and Andrew of Spain, Tiffany of Sydney and Jenny, Elizabeth, Zowie and Sue of New Zealand for their support. Thanks also to Sue of 93 Drummond Street for looking after my canvas, Melissa for letting me use her home in Tasmania, Meg and David for looking after me so attentively these past two months and to Thomas, for letting me be me and for teaching me so much.