A grand day out for the BBC

Well I haven't done the best job at keeping things quiet it has to be said, but then I was rather excited. Luckily I have got a green light from the producers to talk about my little bit of news, so here goes... Back in September, when I was living temporarily in my parents flat in Brighton I received an email from Edward Morgan from Northern Town, the production company that made that beautiful and touching short film about the life of Rory McEwen which was used for the exhibition at Kew in 2012. He wanted to let me know that the BBC had decided to commission a half hour programme on the life of Rory for BBC4 and wondered if I'd be interested in doing a spot of filming for it.  Naturally I was more than delighted to help.

Having recently moved the Inky Leaves studio to Spain I wasn't able to invite the crew to my Brick Lane studio, so we had to think of another UK-based location and it was then when I mentioned that the Chelsea Physic Garden is pretty much my 'second' studio. It's where I go for inspiration and I am frequently painting amongst their beautifully planted boarders. After a couple of recces it was decided that Chelsea offered an ideal spot, not only because it was it was a bit different to the usual indoor setting one might use for an interview, but because it is also quite close to Rory's old house in Tregunter Road.


So now you all know why I took the plunge to paint on Rory's vellum a few weeks ago and why I flew back to Blighty this week... Well actually there were several reasons why I flew to England, but this was one of them. Thanks to British Airways, who were incredibly accommodating and helpful, I was able to bring my portfolio and vellum on board with me alongside my hand luggage. This was really important as the climate in the cabin is much more regulated and my work and materials were thus protected.

I originally thought that the day wouldn't be very long - as it is intended that the documentary will cover his musical career as well. With so much of Rory's colourful life to get in a short space of time, I concluded that I will probably get a maximum of a couple of minutes of air time. Therefore, I thought a couple of hours of filming would have been probably done the trick. Alas, it was surprisingly a rather long day and what was brilliant was I had absolutely no idea at the time. I was enjoying the experience so much that I hadn't realised how the day had flown by. I think we were at the garden for about five hours! We didn't have to do many re-takes - all the one's we did were due to aircraft flying over. There were some pretty cool planes at that because of course it was Armistice Day.

A consequence of me enjoying myself so much is that I completely forgot to take some photographs of the whole event. This is what happens when I have too much fun, I get completely lost in the moment. Luckily, the Director of Photography and digital maestro Terry Wilson from Northern Town, has managed to take some screen grabs for me which I have loaded up on here. It feels a little self indulgent, as you only get me, but we do need some pictures to space out the text... so apologies for not being able to post images of the entire set up but I think you can get the gist...

The day started with the sun actually out - can you Adam and Eve it?! I was so utterly over the moon to see the sun shining through the Autumnal leaves and I wasn't the only one, therefore we begun the day filming shots of me walking around the garden while the weather was being ultra kind. Then, as the misty clouds started to roll in we went into the glasshouse with all the Germaniums and Pelagoniums inside. It smelt delicious. 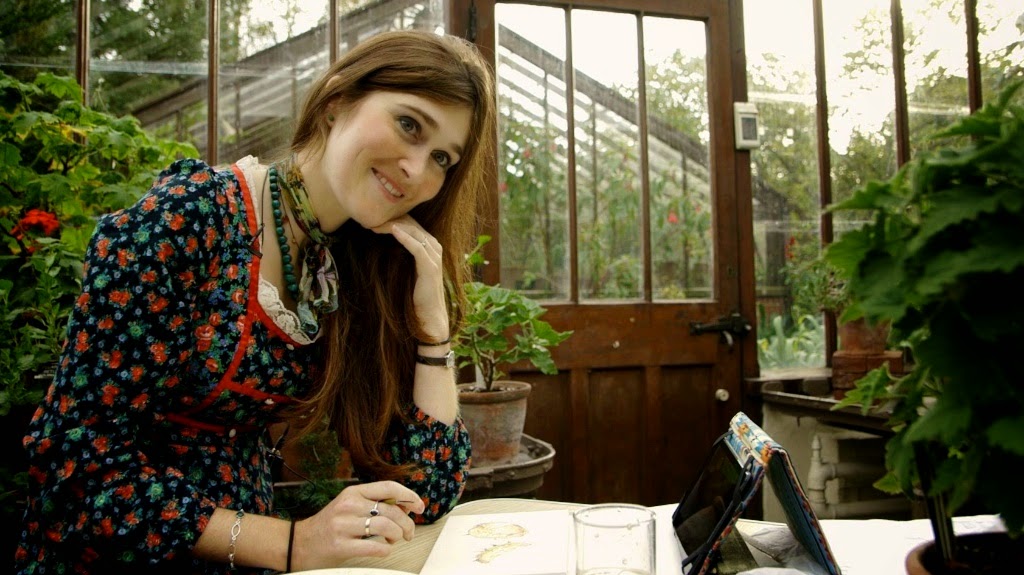 Once inside there were lots of other takes and two types of interview - one of me painting and the other not. Alison Grist, the Director, was really wonderful. She was really kind and really helped me throughout the day. I don't know what I would have done without her support, attentiveness and creativity - a seriously gifted producer. Hopefully, with all this assistance and with Eddie and Lily Middleton (Marketing & PR Assistant at Chelsea Physic Garden) filling us up with coffee it has come out well. Throughout the whole day I remember really trying not to muffle, stutter, hesitate or swear (the latter of which, as most of me nearest and dearest can confirm, is really difficult for me. I am no Malcolm Tucker, but the occasional word has a habit of slipping in when I get overly enthralled). Anyway, the production team were pleased with the material they gleaned from the day, so I guess we shall just have to wait and see what they decide to use and how they edit the content.

Of course, I realise that all of you will be very excited to hear that there is a programme on Rory McEwen coming out and I know that you will want to know when it is being first broadcast. At this current time I don't have an official date, but I know it is likely to be sometime in February 2015 - I will keep you posted. In the meantime I am incredibly honoured to have been asked to participate in this project and really hope that that I have done Rory proud. I am very grateful to everyone in the production team, the Chelsea Physic Garden, the McEwen family, Martin J Allen and of course BA.

Chelsea have since written their own a article about the day which can be found here.
Posted by Inky Leaves at 00:17