On a sunny September afternoon, as tired leaves rustled in the garden beyond her window pane, she opened her book 'An Inquiry into Blue' and took out a flatted, knotted mass of black and brown hair that she had collected from a bed at Kensal Green several weeks before. Then, with her other hand she opened an indigo bound copy of ‘Zen and the Art of Motorcycle Maintenance’ and placed the hairs between pages 32 and 33. Once closed, she took the Antwerp blue scarf that was wrapped around her neck and tied it around the book before hiding it at the bottom of her wardrobe...

I plunge a large fishing net into the depths of a turquoise pool to fish out hundreds of yellowing leaves that fell from the trees I watched so carefully for three years. Catalpa, Mulberry, Fatsia, Conker and Judas, they were all there, floating and rotting like ghosts in a blue haze. Funny how things can be so symbolic. I sit and watch for a while as the low December sun pokes its head over a roof top, casting a halo of light through a blue sky. White squiggles dance in the blue watery rectangle, playing with the lost leaves at the bottom of the pool.

A story is not always what it seems. Life is a wonderland full of hidden mysteries, most of which will never be solved. After a year of deep introspection, I finally feel I can begin the written element of my journey into blue. It's taken me months. From the first moment when the seed of an idea was sown back in 2015, I have spent many afternoons trying to consolidate blue, but it is a colour that cannot to be captured or ordered and what I have come to realise is to have spent my afternoons under a setting sun on Worthing beach devouring books on blue was about as useful as reading a book on yellow. You see, to understand blue one has to dive into the shade. Blue has to be experienced.


Project Blue flower is so multifaceted that I don't really know where to begin when it comes to the blog or the printed Inky Leaves newspaper. In the end, after six months of contemplation I made a bridging post called 'Down the Rabbit Hole' back in May when, like Alice in her blue dress, I was tiptoeing around the edge of an illusory chasm after Leafscape.


Blue is the scattering of light. Like the soldiers under cornflowers, it is lost. This displaced light is like a inconsolable rubix cube. The colour refuses to be ordered into chapters; it won’t be bound by rules, grammatical or otherwise. Blue is nebulous and has mushroomed at different points of my life to date. Like a fungus, it is always there, lurking between the shadow and the soul and tends to only reveal itself during times of utter ecstasy or despair. It litters the optimistic blue skies of holiday snapshots and percolates through my darkest pain. It’s the colour we turn when we are dead and the colour we often are when we are born. It is the colour that sits between the physical body and consciousness. Like for Miro, it is the colour of dreams. 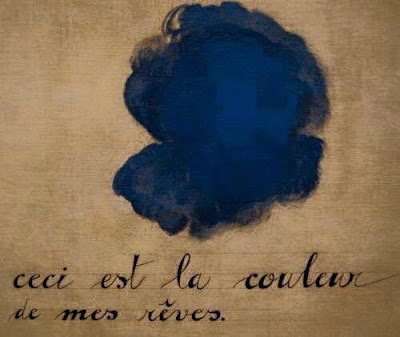 People often associate the colour red for love, but I have never felt this myself. To me love is always blue. Its purity, it’s escapism and its disorder is encapsulated by blue. For me, to be in love is to be lost whilst becoming totally aware of the vulnerability of your body and your soul, and when you enter that space and dive deep, you strike that blue vein like a pot of gold.


The earth is like a blue orange (Paul Elvard)

Henry, who I was with for almost five years, used to have Miro's Azul II Lámina hanging above his bed. I always thought it was a good place to hang a painting such as this. Blue was Henry's favourite colour, he wore it all the time. When I moved in next door I remember buying blue curtains in the hope he would spend more time in my room. Needless to say it didn't work. The bitter sweetness of blue. We spent our last holiday together driving a friends Chevy around California, the interior of which was all upholstered in the deepest velvet blue.

When I met my first love, Alex, he gave me a Decaisnea pod. He had just picked it from a tree on Mount Edgcombe. Also known as ‘Dead Man's Fingers’ it was a fairly odd thing to give someone. I remember seeing the pod and thinking how unnatural it looked. All that blue. I tried to keep it preserved, but like the relationship it decomposed and the blue faded with time. Refusing to be captured, it seems, 'for blue there are no boundaries or solutions' (Derek Jarman).


The last three years of my life have been dominated by shades of green, and for a while I didn't feel blue, that was until this summer. This time my total submersion into the tone would be sudden and deep. It was like I had been transported into a David Lynch film with its blue keys, blue boxes, blue roses and blue velvet - nothing made sense, and yet it did.


So there I am, slap bang in the middle of a Lynch. I am trying to prepare for an afternoon coffee in Chelsea. For some reason I didn't have my burgundy beret with me, so my friend Natasha lent me her Navy blue one. I only realise now that I was wearing a blue hat, with a blue top and of course, blue jeans. This was the day when I opened my door to the Cheshire Cat. I'd already been following the White Rabbit of my ideas, but then this Cheshire Cat came into my life under the cast of a winter eclipse. There was something very 17th Century about him. I always felt that he should have had a musket, square buckled shoes and a plumed hat.

I saw Mr. Cheshire again a few weeks later in Chelsea after having found a plastic sparkly unicorn on a chain on the floor. I was wearing my Laura Ashley blue corduroy dress and reading 'Blue Mythologies' outside Sloane Square tube station. He was late, and I was cold. After visiting an art fair we ate dinner in the Blue Bird on Kings Road and talked about how dangerous hope is, both coming from opposite ends of the lens of course. Me the optimist thinking it as a weapon for good, he the pessimist thinking it inevitably leads to disappointment.

Blue is paradoxical; it is self-contradictory, yet true (Carol Mavor)

Three weeks lapsed and on the day of a full moon, we met in Brighton and visited its Palace. Then, after walking the length of the pier, he ended it. Just like that, like a bolt out of the blue. We walked in silence to the train station and parted ways after I gave him a love note I'd made on blue paper. It was terribly sad.

We love to contemplate blue not because it advances us, but because it draws us after it (Goethe)

In French bleu means both the colour and a bruise. I was bruised and alongside all of this I was desperately trying to keep all the Inky Leaves saucers spinning, which was quite a task. I had problems with the second book as I was dissatisfied with the quality and had to keep asking for it to be redone. Inconsolable, I ran away up to London and slept on a friends sofa. The sofa was upholstered in the same blue velvet as the Chevy I'd driven around California in 3 years earlier. I lay there, crying as she painted the walls of her flat a dark 'Plimsoll Blue' around me. Then my other friend came over with a bunch of Agapanthus flowers and placed them in a glass jar in front of the blue wall. The scene was like a Greenaway film. I felt like my mood was changing the set design of this flat. 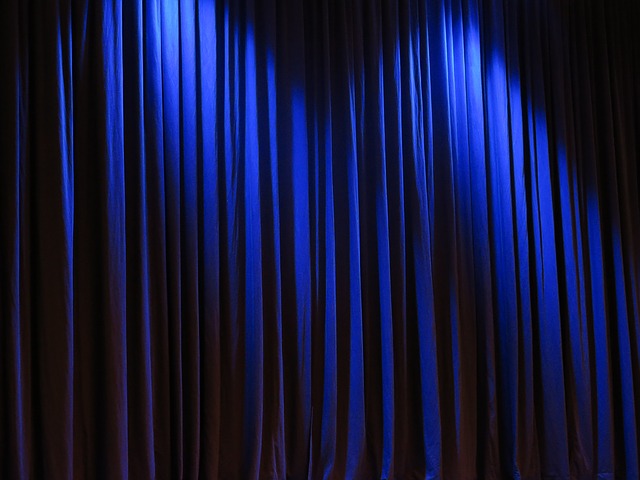 Like Cessil's invisible cobalt ink, the cat and our story line quickly became intangible and indefinable. I tried to retrace things, marching through the ecstasy and the agony of it all in order to define what had actually happened. Naturally I failed and several months on I am still failing to understand its bitter sweetness. I feel confused, lost and helpless - like man who was swept away by the (blue) Danube after picking his lover a blue Mysotis flower and shouting 'Forget-me-not!' It's now December and unlike the bruises on my neck, the bruises in my heart haven't healed. These are still blue. Blue from the joy that it actually happened to the blue me grieving having lost him and myself in the process.

I died a little death this summer. I will never be the same person again. It happens, it's life, but this will take some time to recover from. With the blueness of nostalgia I think backwards and with its optimism I think forwards. I take the scarf from my neck and wrap it around the only thing I have that tells me he was real and not a dream and I start my first flower: the Agapanthus.

Unicorns and cannonballs,
palaces and piers
Trumpets, towers and tenements
Wide oceans full of tears
Flags, rags ferryboats
Scimitars and scarves
Every precious dream and vision
Underneath the stars, yes, you climbed on the ladder
With the wind in your sails
You came like a comet
Blazing your trail too high
Too far
Too soon
You saw the whole of the moon