Like the Autumnal leaves around me, I am very much focusing on my use of reds and yellows at the moment: 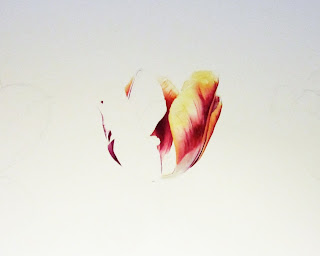 I really got into the rhythm of this painting on Monday night. I find that when I get into the process of painting, I 'dance' around the subject less and am more able to put down solid colours. The process becomes riskier, but more fluid and enjoyable. I exercise a degree of faith in the work. I don't know about you, but when I am not in the 'mood' I can waste vast amounts of my time touching things up and over working whatever is there. So I did make a bit of process on Monday night after an hour or two at the desk - no more. I am starting to find that short stints are also the answer as they keep it fresh and prevent over working. 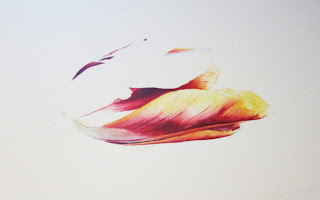 Yesterday I started painting a new piece. I am really getting into painting tulips with as much accuracy as possible. I consider them quite an easy form to paint, which in turn should make capturing the realism easier.  I have never really liked tulips much in the past; always favouring poppies and peony's, but in the last 3 years I have learnt to adore them for their simplicity. I find their petals and floppy leaves can add a lot of movement in compositions. 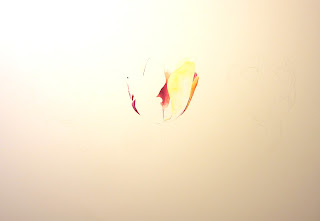 This piece (below) will have the same flower, but three times over from different points of view. Why three? Well because things work well in threes, and why this flower yet again? Because I like it and I feel I am getting to understand it better after completing 'Chelsea Tulips' (well not completing - almost, got bored of it so will return to it at a later date). Thought I'd start doing compositions that I don't usually do (to me this one is much more mechanical).  There is a reason behind this experimentation - I have an idea about painting flowers through time and I am basically trying to work out how to represent this idea on a piece of paper. It came to me after I stitched all the images of Chelsea Tulips to make a sequence piece of the painting growing through time. I then thought it would be nice to represent the flower aging instead of the painting and this is how I got to my idea. Lets just see how it goes. It's probably been done before, but it is something I am interested in pursuing.


The amount of painting I am managing to do has really slowed down this Autumn and I have been surprised by that - it wasn't intentional at all. Thursday was spent visiting the hospital again, so a lot of time was wasted on buses and in waiting rooms on one of my days off from work. The good news is this has given me some time to get on with Henry's present: 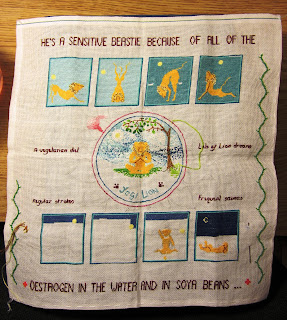 Four boxes filled - another 4 to go! Then the lotus, and the soya beans and then the watery background. 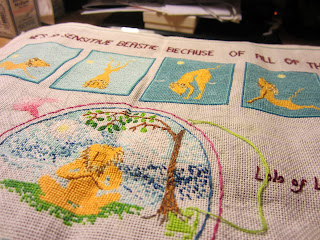 Right click and open image in a new tab to see it larger.  Couldn't squeeze it in the blogger template. Just mucking around with an idea, this is an 'extreme' prototype!
Posted by Inky Leaves at 05:38 No comments:

Did a bit more painting yesterday on both Monstera and Chelsea Tulips, but it was rather slow going! I guess I wasn't in the mood so it just took a little longer to get things onto paper. 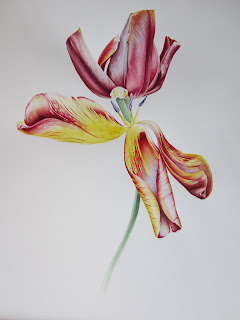 I think maybe after one more day, this one and it will be finished. I am desperate to start something new if I am honest! I am finding this one still very tricky - the stripes, the highlights and the colour changes. Those petals have nearly ever single colour in them - oranges, yellows, reds, purples, pinks, greens and blues. The highlights are ultramarine to mauve in colour, which is really tricky to achieve as it requires only a light wash. 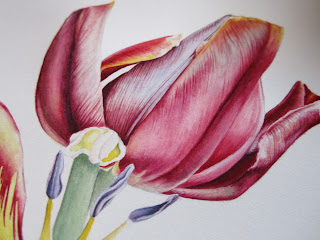 Been busy sewing again too and will post the progress I have made with this next time. I am off to see my mum soon which will be nice. It's hers and my step dad's wedding anniversary next week. It'll be nice to see them both and refreshing to visit the seaside.

I am now starting to think on what I can paint next after this one. Again I want to do leaves which doesn't really fit in with the title of the next SBA exhibition. I just seem to be attracted to leaves much more than flowers - I always have been and probably will always be! 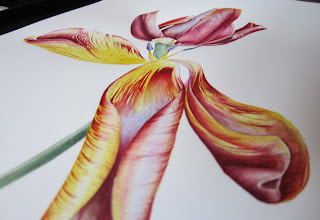 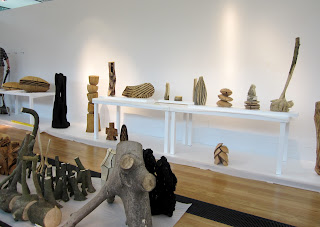 It's a wet day in Kew Gardens today and it is so quiet you can hear a pin drop. I'm glad it's quiet though, as there is nothing worse than disappointed visitors. The gallery is only half open this week while we install the second part of our David Nash exhibition. All the big sculptures have come out of the space and are being replaced by some smaller works which David has made during his time here at Kew. Some of the gallery rooms, such as the boulder video, are staying the same, but the main space has changed immensely over the past few days. 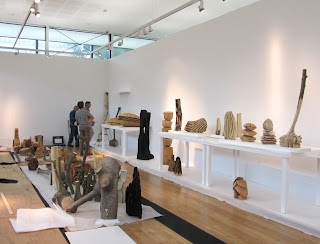 David with his workers busy installing the next exhibition


Early starts for all us this week as we march on. It's a relatively short change this time which is good for visitors and it means we'll be open for October half term. We'll be officially open on the 13th October and  David will be in the gallery signing books between 2 and 4pm.

I really like these new additions, although I do feel they work best as a collection. I particularly like the large 'clams' at the back of the top photograph.  Many of these sculptures will be for sale and I'll be interested to see how many sell. 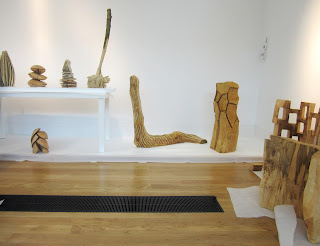 There isn't much other news from Inky Leaves. I had the weekend off and went to the Pre-Raphaelites exhibition at Tate Britain, which was 'okay'. If I am honest I wasn't sure about the way it had been curated as I felt that to analyse their work was to do something that the artists stood against. In my view the Pre-Raphaelites were about beauty as a whole.

On Thursday I might pop to St. John's College in Oxford as there is a fabulous retrospective exhibition on Catherine Nicholson. If I don't get the chance I'll get on with some work of my own! 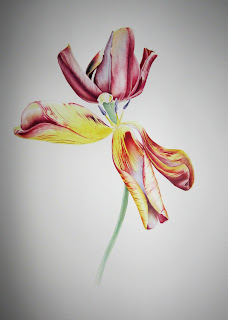 I managed to get a bit of work done on the top tulip today. When I started this piece I got totally confused and thought all the petals were part of one flower. Only while drawing it on the page did I realise that there were two tulips - one behind the other. I think I must have been tired that day. Anyway, I quite like that arrangement now - one 'hiding' behind the other. You couldn't even see the other stalk because of all the leaves, and I am still wondering if I should keep it like this. It's like surrealist botanical illustration. 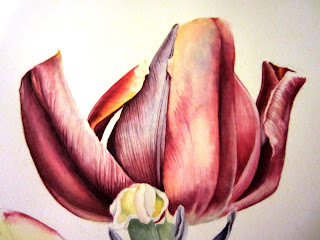 I also managed to get some work completed on my monster this week. I seem to be really on course at the moment (God knows how). This beastie is starting to get tricky now. I find leaves are always trickier at the end, and flowers at the start. I have no idea why I find this - I just do. Something about the finish. I have started using Prussian Blue on this one and it seems to suit it. I have used Ultra Marine on the right though. I noticed the tint of blue changes as the light dances across the leaf. 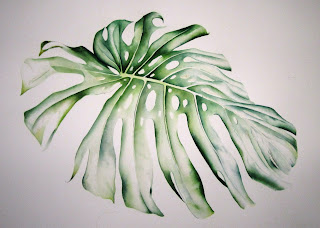 Other news is that I got given a load of paints when I was in France which is pretty amazing (inclusing Prussian Blue). We stayed with some lovely people called Diana and Jean-Pierre and their son Nicholas. Jean-Pierre and Nicholas are musicians, and brilliant ones at that. Nicholas has just realised a new album which you can hear here. It's very folky.  Diana is an artist and used to be a demonstrator for Winsor and Newton. As a demonstrator she got loads of free paints and products, which is pretty jammy, and she was kind enough to pass some on to me. 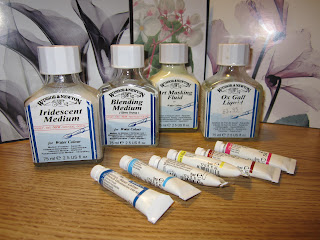 My new paints and products which I managed to get through in hand luggage.

Nowadays Diana is busy renovating a 16th century house with her husband whilst working in her little studio. She is currently creating works which interpret the memories attached to their new ruin. They keep finding traces of how life would have been like in this farm. They have even found a corset with patches sewn onto it where it needed repairing. Both the house and her work are truly fascinating. I hope that she'll have an exhibition in England soon! 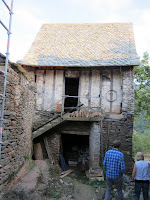