Hiding in the library 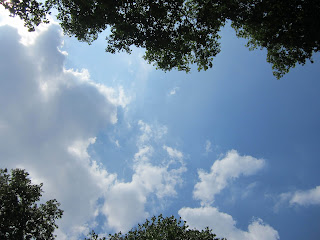 Alas today I did what one can only do in this heat and took shelter in a library. When Henry returned from work yesterday even he said that the studio was unbearably hot and that it was not really advisable to sit in it all day trying to work on my day off. It's south facing and the windows don't open properly you see... So I got up early, cooked a Very Full Tart before the heat set in, made some salads and trekked over the Fitzroy Square to have a picnic with Henry. It was super. 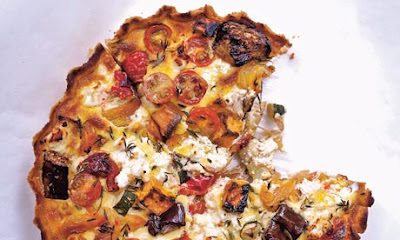 
There were so many people outside. The city centre is almost unrecognisable at the moment. It's more like Barcelona than London. I thought I'd put a picture in for all my readers across the globe, so that they can see what is really like. This square is a really pretty one. It's 18th Century and it has a private garden, which the residents open in the summer months for all the workers in Fitzrovia. It was very busy and I was really busy people watching for about 30 minutes before Henry arrived. There were two things that I found interesting. Firstly everyone was aged between 25 and 35 years and secondly, no one had a packed lunch. Itsu sushi was the most popular meal, followed by Pret, Planet organic, pizza takeaways and fish and chips. I only saw one Mr Whippy being scoffed and one cigarette smoked. I found it interesting that no one brought a packed lunch and am stunned by all waste and packaging left behind in bins. I do like watching life, it puts everything into context. 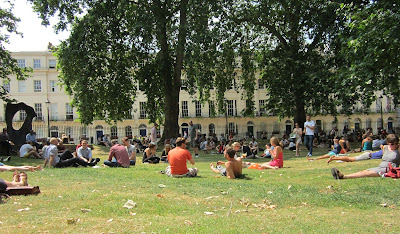 
Then I popped over the to the Wellcome Trust and hid in the cool. I saw a fabulous exhibit whilst mooching around there. It was a book case which held the entire human genome in a series of folios. It was laid out in such a fantastic way. You can see more about the exhibition on this blog. A... G... T... and C... - adenine, guanine,  thymine and cytosine. It reminded me of computer programming text, and I suppose after all we are just emotional computers. This to me was both a fascinating and disturbing exhibit. It's both disenchanting and arousing. I do like the way in which it has been printed on paper though. This makes it somewhat precious, like archival material, which I suppose is what it is. It's an archive of our history and how we came to be. 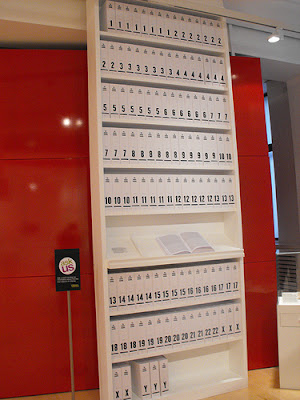 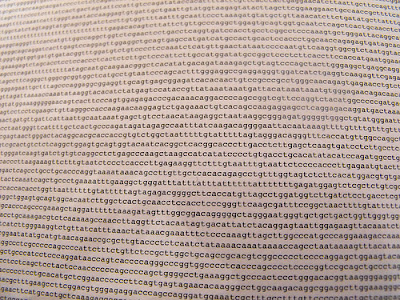 On another note... here are some of the sketches I had drawn during my time in Spain: 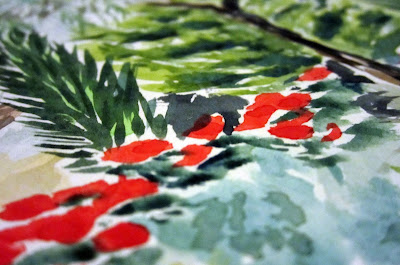 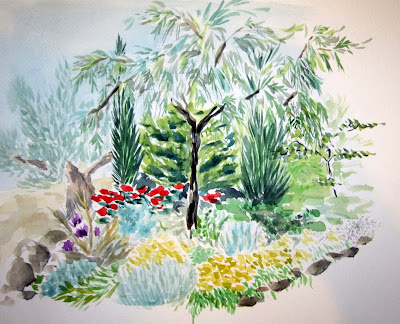 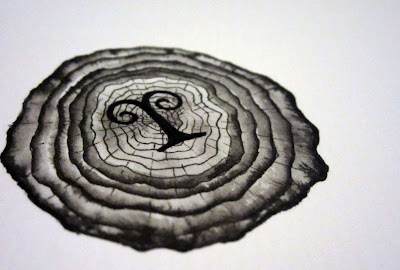 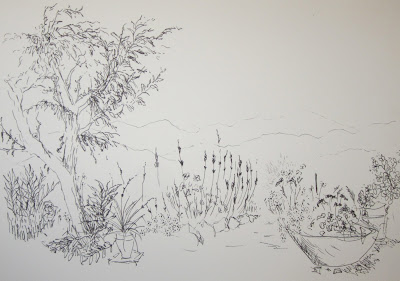 Oh, and I have loaded up the progression of Yogi Lion on my Blipfoto account so you can see the progression... Just flick through the album, it's quite fun to watch.

When it's this hot - head to the museums

It's too hot here! I can't function in this heat! I can't even sunbathe it's so hot. Today I have sat in a darkened room sewing the back onto Yogi Lion. It is now properly finished and I am pretty pleased with him. I just wish it would cool down a bit. London is like an oven and it's really humid. I haven't been this hot since I went to Bombay.

There is only one thing to do in this heat besides zombie-fying in front of a fan or melting and that is to go and visit some of the big museums. The great thing about national museums and galleries is that they have to have climate control, which means they should never go over 21 C. This is a far more reasonable temperature and tomorrow I will make my way to the Wellcome Trust library to do a spot of reading and then the British Museum. I wanted to visit the Tower of London today, but I don't think that's the sort of gallery that has air-con!

So after putting the back onto Yogi Lion, I planned out my next sampler. This one is going to be on linen. I might not be able to blog this one as much though, because it needs to be kept a secret and you ever know who looks these things up. Hope to finish it next year, so lets see how it goes.

On my days off last week I was again pretty non-productive (what's going on here?!!!), but I did manage to do a spot of painting on the second day: 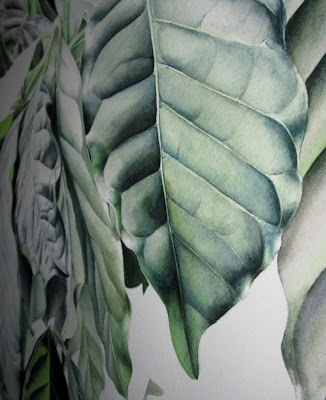 This leaf is a right pain, in fact all of the last ones are! But the light is reflecting in a weird way off of this one so I can't get the reflections to make it look REALLY three dimensional. It looks flat in reality, so it's going to look flat in the painting. Bit irritating, but can't be helped. I am enjoying the challenge though. It's good fun! 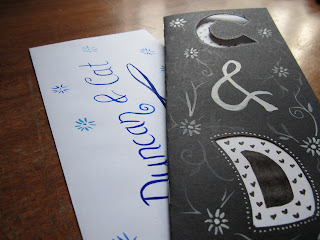 Been making some cards... I appear to know lots of Leos and Cancerians... Oh, and Henry's brother Duncan has just got engaged to a wonderful girl which is brill and therefore also required a card.

At this point in time I am currently busy cooking, which I have to say is the last thing I want to be doing in this heat. I feel really sorry for all chefs out there, and glasshouse horticulturalists come to think of it. I don't even want to know how hot some of the glasshouses are in Kew at the moment.

As I right this, someone in my street is blaring out some pretty cool music, sounds a bit like the Rolling Stones and my house smells of BBQ smoke. At first I thought it might have been me who was on fire, but alas no. The entire neighbourhood has gone al fresco. I quite like that part of the heat wave. It's a good time to catch up with the neighbours. 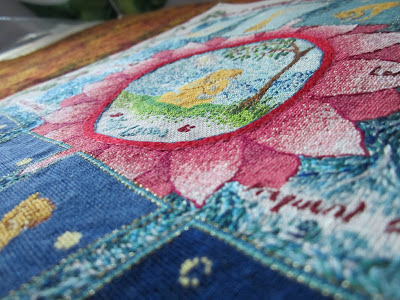 So I have managed to finish this little project... and hopefully the giant coffee plant will soon be next. Whoopee! It's great tying up all these loose ends. I am dreadful at having too many projects on the go at once and am always very conscious of the fact that I need to finish projects before I start a new one. Most of the time I just can't help myself - I love starting new ideas. However this time I am being really disciplined and seeing projects through to the end. It's time to pull all the strings together (excuse the pun).

I started this embroidery July last year, so it's taken 12 months give or take a few days, but I haven't been working on this beauty continuously. It's a product of all the tube rides I have been on, all the period dramas I have watched and all the sun bathing sessions I have taken part in. 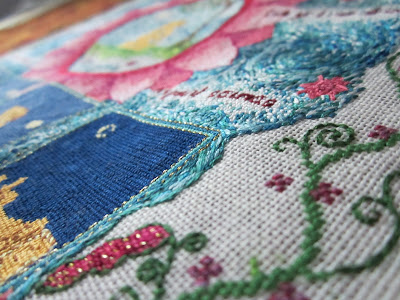 Today was almost a 'disaster' as I had really geared myself up to get on with Caroline the Coffee plant, but alas it was not meant to be. I just couldn't focus and kept making mistakes. So I decided to cut my losses and get on with something else. The sewing was good idea - I was definitely in a sewing mood. 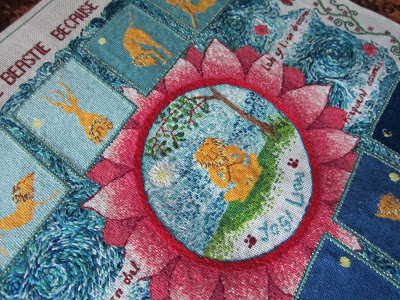 And here it is in it's entirety face on... 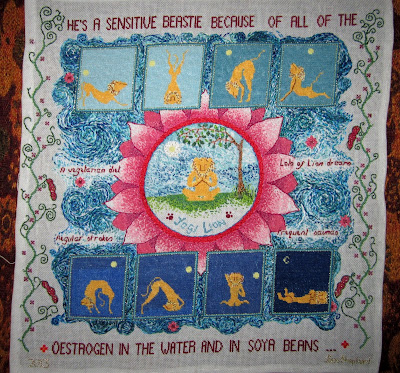 I saw this video on YouTube and thought I'd share it with you all. For me it's very apt. Please don't worry - am not dying (although I guess we all are to some extent), it's just a good reminder of what we need to be doing with our time. Since writing my last post I am still meditating on my take on time. I have had a few shake up calls from my family too and have a distinct feeling I really do need to get on with it. Although I need to be careful of what 'it' actually is. I have way too many ideas, and I need to break them down and chew them over for a few more days.

Despite all this deep philosophical chewing, I am having a lovely relaxing time here with the family. Henry and I frequently come to Andalucia because both our parents live very close to one another and it's great seeing them. It's even better when they live so close to such beautiful scenery! 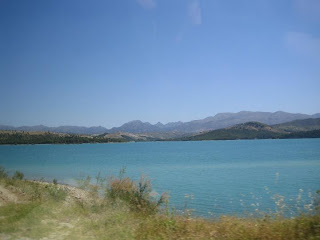 
Looking forward to my return to the UK. I can't tell you how much I have missed Drew my drawing board! I have tried to do a bit of painting in the garden here, but it isn't the same as painting on Drew. I have also missed our little back garden, and hope that everything is still alive. I am sure my housemates have done a super job of looking after my green babies!
Posted by Inky Leaves at 12:12 2 comments: