It’s been a month since I last posted and presented my personal enquiry into the sublime to you all. Since then, I have been inundated with your thoughts and responses which have all been very helpful, thank you. It is really magical to have you on this journey with me.  As many of you may know, I have just finished a painting titled ‘041120151204’. The piece did become an obsession and consequently it has a crazed, heavy, fanatical look about it. As it sits alone on my drawing board, a bit of a monster, it naturally creates a dent in the space around it. Heavy with more than just paint, it sits there like a black hole drawing everything in. I have no idea how this happened or how it is doing this. I feel quite surprised that I seem to have created something that has so much magnitude and illusionary prowess. It certainly was not planned and I can only put it down to something heavy being transmitted through me. A technicolour shadow, this piece will most certainly have to be hung on its own – it just dwarfs everything around it, including me. I know these leaves are big, but this one is the first one that manages to shrink its audience. accomplished.

The thing about his piece is it appears to concentrate time like no other previous leaf and time is intimidating. If we take it that the ripples of veins and colour represent the leaf’s passage through life, and the intricate blobs of paint representing my own marks through time, this leaf has loads of both and their combination seems to be synergistic.  The leaf is like a lump of igneous rock that has been left to cool slowly. It is weighty. The pain of pushing this beast out in time was mentally hard – gruelling in fact. It reminded me of when a fair ground ride is going too fast. One could feel the tickle in the gums below the front bottom teeth and that whoosing feeling which is just as horrible as it is good. I like this giddy effect and I know I am not alone.

I am interested in how a painting draws someone in – is it to do with escapism (through wonder) and if so, are even the most realist of works a form of escapism?  As I have mentioned before, I have come to realise that when you paint something you end up having to confront all of reality, and eventually one ends up asking themselves what reality actually is. As Bachellard said in his Poetics of Space, “everything takes form, even infinity. We seek to determine being and, in so doing, transcend all situations to give a situation of all situations”. Perception fascinates me. What is it that we actually perceive and what is it that we can't or choose not to. How do our different filtering systems operate and can we see beyond the mere physical? What makes something physical and can real things alter?

Recently I watched the film Don’t Look Now for the first time and was so blown away by it I ended up watching it again a few days later. It’s a modern Gothic thriller – but not in the ordinary sense in that it isn't super scary. Its primary focus is on the psychology of grief and how that in life nothing is quite what it seems. The plot is heavily preoccupied with misinterpretation and mistaken identity and the film is renowned for its innovative editing style. It often employs flashbacks and flashforwards and some scenes are intercut or merged to alter the viewer's perception of what is really happening. It also adopts an impressionist approach to its imagery, foretelling events with the use of familiar objects, patterns and colours. All in all it is very cleverly put together.

The film drew me in instantly, but it really got my vote when one tense scene towards the end featured only one half of Julie Christie's face. She looked like one of my leaves - the concealment of her features made you incredibly aware of edges, boundaries and the limitations of our perception. The similarity between the two was further exacerbated by the fact that I was at the time experiencing the same types of giddy emotions I feel when I look at one of my leaves because of the very nature of the narrative. The film is a tragedy, but there is also something beyond the simple moralistic story line of a tragedy in its most basic sense because there is something numinous going on – something uncontrollable and therefore in mind - sublime. One of the main characters is so busy focusing on the rational sense of his tragedy that he blinds himself to the irrational world of the sublime around him. There is also another character in the plot, but they function in the complete opposite way in that they cannot perceive our own 'reality', but have the gift of an irrational 'second sight'. This film epitomises everything I am trying to do with paint and when they showed half of Julie’s face I admit a smile materialised across my face. Somehow we have arrived at the same point, a phenomenon that I find happens more often than we realise.

So maybe my work fits more closely with the Gothic - a movement that is primarily focused on decay, death, terror and chaos? Something that puts irrationality and passion over rationality and reason? The Gothic narrative, despite unsettling, still brings about feelings of pleasure, but it's method is to address the horrific, hidden emotions that individuals can harbour and provide them with an outlet. The strong imagery of terror and horror in Gothic stories reveals truths to us through fear. Eve Kosofsky Sedgwick wrote "that the idea of a protagonist having to struggle with a terrible, surreal force is a metaphor for an individual's struggle with repressed emotions and thoughts. Personifying the repressed idea or feeling gives strength to it and shows how one, if caught unaware, is overcome with forbidden desire. These desires are mysterious, and mystery breeds attraction, and with attraction one is seduced.” What interests me is that if we think about it in these terms, the Gothic movement never really ended as it lurks as a hidden movement in all of us all of the time, and more importantly - it draws us in. It is seductive.

There is also a difference between terror and horror that needs clarification at this point as I am not interested in the ‘horrific’. The difference between the two is that terror supposedly expands the soul and awakens the faculties to a high degree of life; the other – horror – contracts them.  Horror is not a source of the sublime, but terror is. In short, terror opens the mind to the apprehension of the sublime, while the abhorrence involved in horror closes it. Therefore I remain to be interested terror and not horror. I want people to be expanded by my work and not disgusted. They are not car crashes on the sides of roads.

The Gothic novel started the Romantic Movement, a movement which can be broadly viewed as an attempt to find emotional certainty from nature rather than from God. It is the imagination which serves the Romantics. It is their method of transcending the limitations of the human condition, giving them the licence to morph objects into a more profound form of reality. This movement is characterized by its emphasis on emotion and individualism as well as the glorification of nature. Unsurprisingly, such a concept resonates with me very strongly. I sit in my studio for hours trying to capture and exaggerate intense emotions such as apprehension, terror and awe into an aesthetic experience using nature.

So, is my work as a painter concerned with the Romantic or Gothic? Well, like in all art, it depends on the observer's point of view. I personally resonate more with the Gothic subliminal side. My imagination rarely provides me with answers, it just leaves me in an unresolvable paradox of emotional ambiguity - things just get more complex and confusing. Romantic art on the other hand always seems to me to strive to reconcile discordant contradictions imaginatively by creating a sense of order. Such moralistic organisation is very apparent in the form of a tragedy (cross reference previous post) for example. With this in mind, perhaps there is a little bit of both of these elements at work as I always thought. I am not qualified to describe my work as 'sublime', but I do feel that there is something bewildering about the final product. Maybe it is related to the vast expenditure of labour needed to execute each piece or the vastness in scale, the dash of imagination and the overall complexity? Or is it just good old fashioned mother nature providing a feeling of wonderment? Most likely.

So in the mix of painting like a mad woman, I am now reading about ‘Sturm und Drang’. I have also done a bit of reading around Japanese culture and looked back at all the things that have influenced me to date, including a print out of John Waterhouse’s tragic paintings of ‘The Lady of Shallot’ and ‘Ophelia’ which I have had pinned by my bed since I was about 18 years old. I am looking into ‘ars moriendi’ (The art of dying) and ‘mementos mori’ (remember that you must die) and studying the wondrous landscapes of Albert Bierstadt. I have also been completely mesmerised by the lighting techniques of Henri-Georges Clouzot in his film L’enfer (2.45 minutes in) after a friend suggested that I take a look:


I sit and remember the work I have made before. The giant plant cells hung in the school’s dark room as an installation which ended up being so terrifying that several people dropped their wine glass and shrieked during the private view (this was not intentional). It seems I have always been fascinated with light. Even though I prefer the dark, we all need a drop of light in order to contextualise it. Dusk is my favourite time of day – I like how the colours of plants change and become more luminescent. Blue transforms into something else entirely under these conditions.

Today is aptly 'La Día Gótico' in Granada,  and everyone dresses up for the event. I have been writing this post all month ready for my 'end of month posting' unaware that such a day existed in Granada.  It wasn't until I saw several people in wigs, corsets, leather and lace in the supermarket today when I cottoned on. I felt rather misplaced in my pink flowery dress and beret. A romantic in a gothic world. 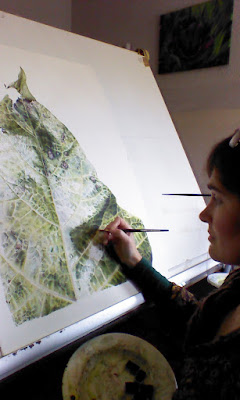