Introducing the Polly the Plymouth Strawberry! 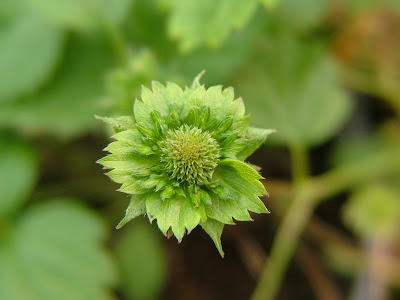 http://www.aphotoflora.com/d_fragaria_vesca_muricata_plymouth_strawberry.html
This is the plant I am studying for my next piece. Polly, or Fragaria vesca var. muricata, is from the damp deciduous woodlands of Plymouth in Devon. The Plymouth area is home to many rare, local and unusual plant species (Pyrus cordata, Carduus pycnocephalus, Silene vulgaris ssp vulgaris to name a few), but the Plymouth Strawberry is the strangest. It's like a common wild strawberry, but not so tasty. It's flowers don't have any pure white petals and it's fruit isn't really a tasty summer treat. Due what I think is a naturally occurring genetic mutation, all of the floral parts have reverted to leaves (green leafy flowers) and the fruits are covered in green spines. Petals, anthers and sepals were after all leaves originally - before Angiosperms evolved. So I have come to the conclusion that certain genes have been switched off in this subspecies, making this plant revert to an archetype which unfortunately makes it infertile at the same time. 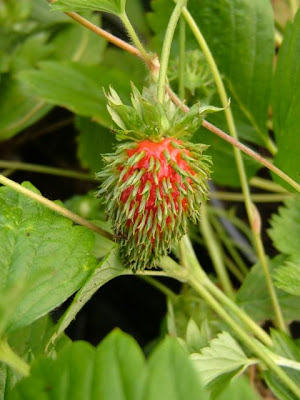 The original plant was found a few centuries back by the famous plantsman John Tradescant, who rescued it from the clutches of a child who wanted to burnt it, thinking it was the Devil's fruit. Tradescant subsequently placed its progeny in every botanical garden in Europe, where it slowly died out un-noticed. There are few publications which refer to this species, and a massive gap in the reference section after Linneaus and Duschene, until 1962 when it was published by a chap called Staudt as being extinct. Probably a result of it's sterility and massive habitat destruction in the city area.

If we fast forward a few hundred years, we come to 2007, when a couple of botany students at Plymouth University (one of which was me) wondered whatever became of the Plymouth Strawberry. The original site has long since succumbed to the sea of concrete and grey stone that is Plymouth city and no live plants could be found in any botanic gardens. Fortunately we found a few colonies which have survived the years in private gardens, mainly in the Plympton and Tavistock area. We managed to obtain some of the plants and propagated them...

Currently, myself and my friend are trying to increase the prevalence of this local variety in Plymouth. Back in October 2009, we planted 50 plants in eight secret sites throughout the city and its remaining wooded areas. It was surprisingly difficult to find suitable sites, but we were confident that at least some would thrive. 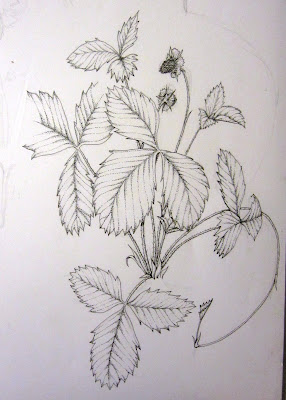 A quick sketch of mine
Bibliography: