Ellsworth Kelly might be better known for his hard-edged, bold canvas works such as this: 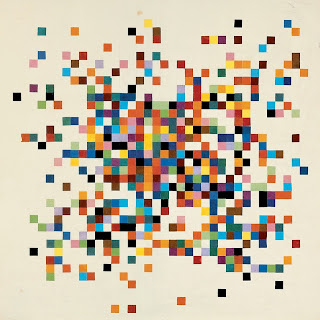 Which I really like, (cross reference Meine Mandlebrot) and would like one of these on my wall very much!  However, I read an interesting article in the Financial Times today that Kelly is also draws plants: 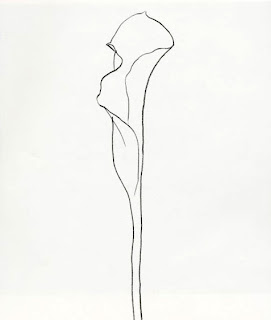 Kelly's drawings depict nature using as few strokes as possible, yet they remain representative. If you like tonal studies - this is not for you! Kelly doesn't do anything but create the line required - a simple, beautiful line. It's all about trying to get the essence of the plant across in a minimalistic way. This is something I have been trying to do myself. Not only to cut down on the time it takes to do a botanical study, but also because I believe that it makes the artwork look fresher. I am a believer in 'less is more'.

I sympathise with the way in which Kelly describes how every one of his drawings has a story. Indeed they do, but where the story lies is often about the subject itself, which I think is often the case with botanical art. It's not about illustrating an event, or a feeling, or a scene, it's about personifying the plant. In trying to describe a plant with a pencil we are also perusing another line of enquiry - not just what it looks like. We are concerned about portraying it's essence or spirit, which is a very human notion. I find myself wondering if the essence of a forget-me-not is different for different people, and my reply is that it is - that's why people paint things differently, it's not just a question of talent or mood, it's do to with an individuals' make-up. So I feel that to give the drawing/subject a story is part of that personification. That's why I give my plants names. Often, the story comes afterwards, but in the end it's about how we interacted with that plant during those moments of exploration.

I am delighted that Kelly will be showing his plant drawings after keeping them private for so long. I hope that they inspire lots of people to draw or at least give them a sense of how cathartic drawing is. It's a risky process marking a blank page, but if followed through with an experimental mind it can be rather magical.